I’ve just read the last book of Alister McGrath, Why God Won’t Go Away: Is the New Atheism Running on Empty? (Thomas Nelson, 2010). 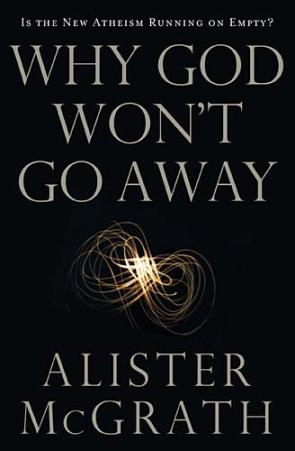 I selected few thoughts, simple and in their logical framework,  but I would like to begin with the last passage of the book:

I’d just finished giving a lecture in London early in 2010. A young man came up afterward and asked me to sign a copy of my textbook Christian Theology: An Introduction. I asked him what had led him to study theology. He told me that he’d read Richard Dawkins’s The God Delusion a year or so earlier and it seemed so unfair and one-sided that he felt he needed to hear the other side. So he started going to church. After a while he found he could not sustain his faith in the parody when confronted with the real thing. He converted to Christianity – joyfully and decisively. “Without Dawkins”, he told me, “I would never have given God a second thought.”

As I  signed the book, the young man told me he had a theological question for me. Since The God Delusion had been instrumental in his conversion, should he thank God for Richard Dawkins in his prayers?

The New Atheism movement has three leading themes: its critique of religious violence, its appeals (and monopoly) to reason and science. Let’s take them one by one, guided by Alister McGrath.

Does religion poison everything?

“Religion”: a false universal (created by the eighteenth-century Enlightenment)

It’s increasingly agreed that definitions of religion tend to reflect the agendas and biases of those who propose them (there is in fact still no definition of religion that commands scholarly assent) (p. 64).

Alberto Toscano (in his recent analysis of the history of fanaticism – Fanaticism: On the Uses of an Idea, London: Verso, 2010) writes that religion is not the only thing to have created fanatics: politics and ideologies have, too, and continue to do so. He shows how the tension between fanaticism and reasonableness is constructed by power groups, with vested interests in mind. His analysis of the “fanaticism” of the eighteenth-century Enlightenment will make uncomfortable reading for those – such as Harris and Hitchens – who naively believe that the best hope for the human race is a return to the Enlightenment (p. 69)

Any discussion about religious violence must take into account the inconvenient fact that Christianity offers a transcendent rationale for the resistance of violence. Christians hold that the nature of God is made known in Jesus of Nazareth, so the words and actions of Jesus reveal the character and will of God.(…) Now, I have no doubt that lots of  Christians fail to behave like this. But maybe that just shows that they are not very good Christians. Christianity will always stand in constant need of reformation (p. 69-70).

Christopher Hitchens argues that the Soviet Union was really a religious state, which explains why it was so immoral and violent (…):

Minor premise: the Soviet Union was evil and violent.

We move from fiction (“all religion is evil”) to pure fantasy (“all evil is religious”), everything being forced into the ideological mold by Hitchens’s dogged belief in the intrinsic violence and evil of religion. He does not engage with the substantial body of literature now available concerning the suppression of religion during the Soviet Union (as we read in The plot to kill God: findings from the Soviet experiment in secularization by Paul Frose, my note), or show any awareness of its implications for his somewhat problematic reading of history.

Richard Dawkins insists that there’s “not the smallest evidence” that atheism systematically influences people to do bad things, and that does “not believe there is an atheist in the world who would bulldoze Mecca – or Chartres, York Minster or Notre Dame”. Unfortunately, this noble sentiment reflects his personal credulity rather than the reality of things (…). Dawkins has a fervent, pious, and unquestioning faith in the universal goodness of atheism that he refuses to subject to critical examination (p. 74-76)

a tendency toward intolerance and violence when such secular “objects of worship and devotion” are challenged or threatened. A good example of this development can be seen in the “Reign of Terror” of 1794 following the onset of the French Revolution, which arose directly out of the secular political ideologies of that age. (…)

All ideals – divine, transcendent, human, or invented – are capable of being abused.(…) New Atheists tend to be a little vague about this, but they certainly seem to encourage the idea that once we get rid of religion, we get rid of some nasty violence. Ther’s just no evidence for this. Two points need to be made in response.

First, the vicious “wars of religion” of the seventeenth century were replaced by the equally vicious but infinitely more destructive ideological and nationalistic wars of the twentieth. Thd erosion of religion as a social force in Western Europe did not lead to the peaceful coexistence imagined by the more idealistic rationalists of the Enlightenment. The First World War, as is often pointed out, had no religious dimension.

And the second, human beings are very good as inventing ways to distinguishing themselves from other groups of human beings and allowing these difference to generate conflict. Religion is one such difference. But there are lots of others: gender, class, ethnicity, sexual orientation, language, and football. Get rid of religion, and conflict and violence will simply find other occasions for their emergence and other grounds for their justification (p. 77-79)

← Evanghelia după Oprah
Why God Won’t Go Away: Is the New Atheism Running on Empty? (About Reason) →